Arkansas Baptists gathered in Little Rock on October 21-23 for the 166th Annual Meeting and Pastors’ Conference. Those in attendance worshipped, conducted business, celebrated numerous ministries for their success over the past year and were encouraged to make sharing the Gospel a priority.

This year the Convention recorded 1,318 in attendance with 366 churches being represented. Of those who attended, 465 were registered messengers representing their church. Arkansas Baptists heard ministry reports from agencies, institutions, teams, and partners of the ABSC. They also attended different networks, panels, and meetings across the campus during the Convention.

The Pastors’ Conference kicked off on Monday, October 21 with speakers like David Allen, Dean of the School of Preaching at Southwestern Baptist Theological Seminary in Fort Worth, Texas, Dr. Mike Spradlin, President of Mid-America Baptist Theological Seminary in Cordova, Tenn., and Steve Gaines, Senior Pastor of Bellevue Baptist Church in Memphis, Tenn. speaking life into pastors and ministers. Restoring hope in a lost world and igniting a passion within their congregations were recurring themes throughout the day.

The Ministers’ Wives Conference always coincides with the Pastors' Conference. Ministers' wives play a strong role in their partnership in ministry and this time allows for them to be encouraged and edified.

“Arkansas Baptists are committed to loving and supporting the ministers’ wives of Arkansas,” Andrea Lennon, Women’s Ministry Specialist and host said. “Each year we provide a one-day conference so wives can gather for meaningful worship, powerful Bible teaching, and purposeful networking.” Author and speaker Rachel Lovingood brought words of wisdom and encouragement to the room. “I personally heard from many women who were blessed as a result of our time together,” Lennon said. “I am grateful for the ministers’ wives of Arkansas. They love the Lord, their families, and the churches where they serve.” 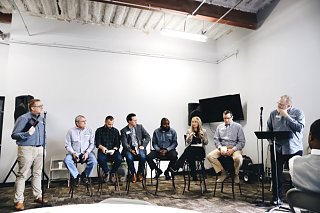 One of the most significant events on Monday was the Young Leaders' Panel and luncheon. Each year, next-generation ministry leaders meet to focus on tough issues facing the church today. This year’s focus was on raising up young leaders and investing in the next generation. To read what the panelists had to say, check out this summary article, or hear them directly here. 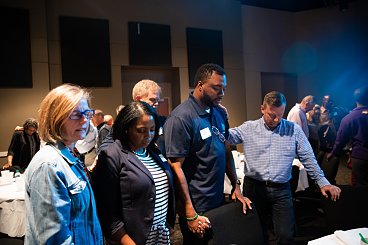 Another highlight was the Church Planting dinner Tuesday night to celebrate the impact of church plants around Arkansas. This dinner is a time for church planters, sponsoring churches, and Arkansas Baptists interested in church planting to come together. The mission and drive of Arkansas Baptists is to see more Gospel centered churches across the state. More unique and diverse church plants across the state mean more Gospel outlets and more salvations. According to Tim Wicker, Church Planting Team leader, 20 new churches have been planted here in Arkansas in 2019 alone. There are still 9-10 in the works that should be done by the end of the year. Read some incredible stories from that dinner here.

The Cooperative Program breakfast was held on Wednesday morning. It was an opportunity for churches to connect with national church planters and learn what’s happening in places like New York, Las Vegas and Seattle. Stories were shared from three different Planters on their journeys to their cities and what God is doing in their ministries. It was an encouraging morning for attendees to see God moving throughout the country and for churches to connect with them and participate in the movement. 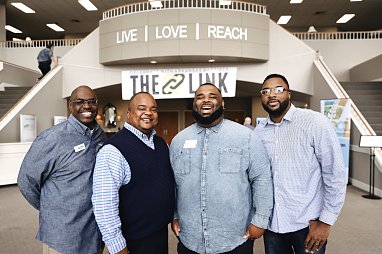 Throughout the meeting, the impacts and successes of ministries were celebrated. The Arkansas Baptist Children’s Home celebrated 125 years of service with a plaque presented to ABCHomes Executive Director, Derek Brown, by Dr. J.D. “Sonny” Tucker. This year at The Link Agencies + Institutions Fellowship, which followed the conclusion of the Pastors' Conference, continued in celebration of the Arkansas Baptist Children’s Home and allowed for other ABSC related ministries and institutions to make connections with leaders.

The Arkansas Baptist Foundation also celebrated a milestone with 70 years of service. The ABF announced that in 70 years, $441 million dollars has been distributed and used for God’s work in Arkansas and around the world. Since 2015, $134 million has been used in ministries - a majority of that money staying right here to support ministries in Arkansas.

Camp Siloam reported that 12 of their college leaders made decisions - nine of those being professions of faith. They hosted 5,809 campers this past summer and reported 786 decisions - 436 decisions of faith, 189 rededicated their lives, 105 were interested in baptism, and 56 were called to missions or full-time ministry. 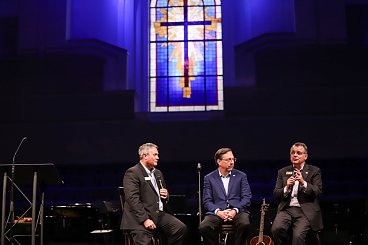 Ouachita Baptist and Williams Baptist Universities recorded growth in numbers, with Williams recording a record-breaking freshman class enrollment. OBU also introduced it’s first class in their new nursing program this fall in a partnership with Baptist Health. Dr. Tucker led the president of OBU, Ben Sells, and the president of WBU, Stan Norman, in an interview-style dialogue about where the passion for Christian higher education came from for these men, and why they do what they do. To hear what the presidents had to say in the discussion, click here.

WBU also announced its WilliamsWorks program, which was developed to keep the cost of Christian higher education affordable for all and allow students to graduate debt-free. The goal of the program is to allow students to have the opportunity to train in a Christian environment and increase their work ethic, so they can rise up and become Gospel leaders in a secular world environment.

Other ABSC teams like Church Health and College + Young Leaders reported about what their own ministry achievements for the year looked like and their hopes for 2020.

Ronnie Floyd, president and CEO of the Executive Committee of the SBC and long-time Arkansas Baptist, was one of several speakers throughout the two-day meeting. His message was focused on equipping Christians to be willing to follow God, wherever, whenever. To watch his message, click here. 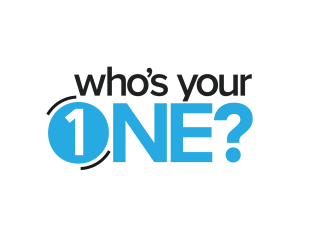 On Tuesday night, attendees gathered for a special emphasis on personal evangelism, focusing on the national emphasis of “Who's Your One?” Those attending and watching live were encouraged to pray about one person in their lives that may not know Christ. It was a prayer to engage with them in conversation about Jesus and to ultimately win them for the Lord. Marcus Brown, team leader of the Evangelism + Church Health Team said, “Seeing Arkansas Baptists identify an individual they can pray for and have Gospel conversations with was one of the big highlights for me.”

The Dixie Jackson presentation on Tuesday night highlighted the ministry work happening around Arkansas and how Arkansas Baptists could engage their communities for the Gospel.

This year, thanks to the Dixie Jackson Missions Offering and Arkansas Baptists, a prison seminary ministry in partnership with Mid-America Baptist Theological Seminary in Memphis, Tennessee held its first semester of classes in the Varner Prison Unit near Grady, Arkansas. Inmates in the program are being trained in ministry to become chaplains in the very prison in which they will spend the rest of their lives.


The common theme, not officially expressed, throughout the conference and meeting was one of being unified. The ultimate goal of the ABSC is to bring the Gospel to our state, the nation, and the world. In a world that is broken, confused and lost we have the ultimate source of Hope and Light. To be that, we, as Arkansas Baptists, must be unified in Christ as we are commanded, standing and working together to achieve our mission and to one day hear, “Well done, my good and faithful servants.” 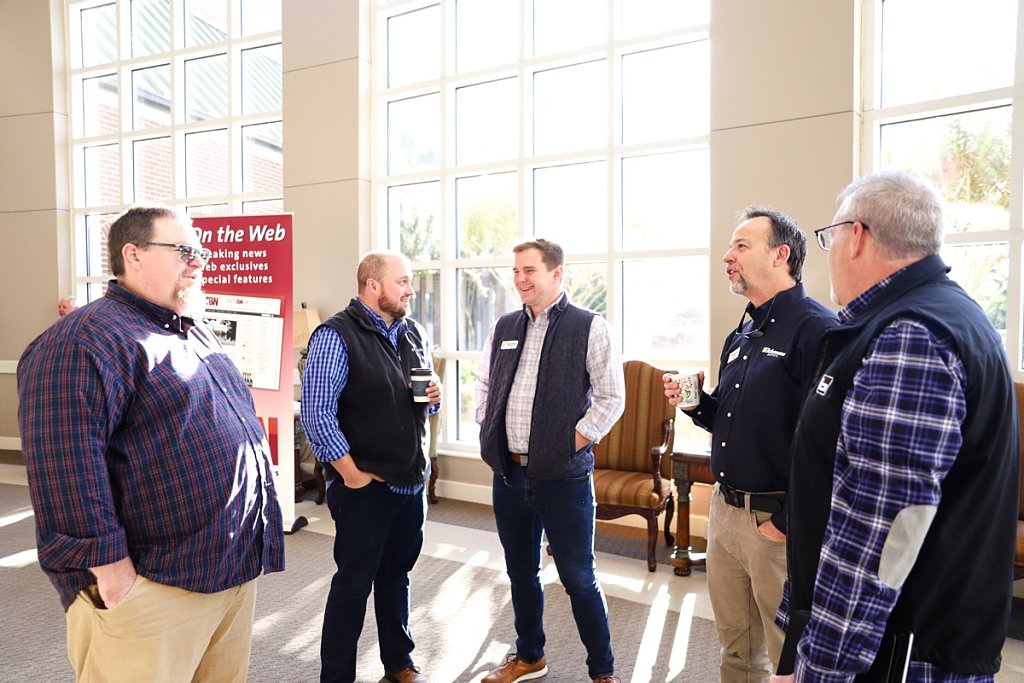