“If I die here, throw dirt on me,” Roderick Rogers said when talking about the small, rural town of Fordyce, Arkansas. An ISS teacher and basketball coach at Fordyce High School, Rogers is determined to do whatever it takes to share Jesus with the souls in his hometown.

Rogers is also pastor of Fordyce Community Baptist Church, a church plant that first began having services in May 2017. But Rogers and his church members were doing ministry long before May.

Before the church was named Fordyce Community, it actually had another name: Lighthouse Church. Rogers planted Lighthouse Church in order to reach “the poor, low-income people from the other side of the tracks.” As it turned out, the need for such a church required more than Lighthouse was able to give.

To pay for Lighthouse’s ministries in the community and to rent buses for mission trips, Rogers worked two or three jobs at a time and also refereed ballgames for extra money. For four years, Rogers said, “we were just out there, knee-deep in ministry but alone.”

In the meantime, other pastors in the community and beyond the Arkansas Delta began to notice the Gospel seeds that Rogers was planting in Fordyce. And it was his hard, faithful work of four years that would lay the foundation for Fordyce Community.

Rusty Ross, pastor of First Baptist Church Fordyce, was one of the pastors who noticed Rogers’ heart for missions.

“In a town as small as ours, we knew each other because our girls are in the same grade school and he’s been an Upward Basketball coach at our church,” Ross said. “We had talked before and figured out that we had a lot of similar ideas about ministry and what needs to be done.”

A conversation about initiating a church partnership and bringing Lighthouse Church into the Arkansas Baptist State Convention (ABSC) convinced both men and their congregations that they could better reach their community together.

“It was God’s plan and God’s time,” Ross said. “It wasn’t really anything we were looking for, but God put this before our church.” He explained that First Baptist Fordyce has done missions all over the state and world, but that missions “right here in Fordyce” is very important to their staff and church members.

“You get used to doing the same things over and over again: Bible school, appreciation meals, Bible study,” he said. “We’ve never done anything like [a local partnership] before. Anytime you bring something new into a church it can be a little stressful, but we are making impact here and we are excited about that.”

“It was God’s plan and God’s time. It wasn’t really anything we were looking for, but God put this before our church.” Pastor Rusty Ross

Even before Lighthouse Church was replanted—this time through the ABSC—and renamed Fordyce Community, the two churches began doing ministry together, including starting a gym ministry and co-hosting a block party. First Baptist Fordyce also informed Geyer Springs First Baptist Church in Little Rock about their partnership.

“I didn’t even know about Geyer Springs,” Rogers said. “I first met their pastor and some of their members at the ABSC Pastor’s Conference. Apparently, a few of First Baptist Fordyce’s people have family at Geyer Springs who learned about what we’ve been trying to do in the community...Now [Geyer Springs] sends church vans loaded with people who tell me, ‘You run the mic, and we’ll run the stations.’”

“It makes me feel like we aren’t limited just because we are a small congregation,” he added. “The sky’s the limit with them.”

For Christmas, Fordyce Community had the idea to host a dinner for underprivileged kids and struggling families. They wanted to provide a ham and gifts for every family who attended. A few weeks before the dinner, the church stored their gift purchases at Rogers’ house. While he was away at work, someone broke-in and took the gifts.

“But what happened is that First Baptist Fordyce and Geyer Springs found out about it,” Rogers beamed. “They wrote a check, and the church and I went to Walmart and JC Penny and bought more than we had before!”

Rogers said that one family in particular stood out to him at the dinner. The dad had just lost his job, but the family was making the regular drive to Little Rock to be with their sick child at Children’s Hospital. “We gave them a ham, a $100 Walmart gift card, and gas money to go back and forth to Children’s. These are the things we are able to do for people because of First Baptist Fordyce and Geyer Springs!”

And Rogers is not the only one in awe. “People have looked at our church’s Facebook page to see what we are doing and commented, ‘How did this little church do all of this?’”

Rogers smiled as he said, “It feels like being on a winning team, like we’ve got a chance.”

Encouraged in the Work

But the growing partnership is not solely centered around financial support. It’s about the relationship.

“This partnership with the Carey Baptist Association and Brother Rusty at First Baptist Fordyce has been a game changer,” Rogers said. “He prays for me every Wednesday. He comes to my job and texts me. Every Sunday at 7 a.m. he and his deacons get on their knees and pray for me.”

“I’ve seen a change in my church and ministry,” he added. “From the moment I met them, they have treated me like they’ve known me all my life.”

Ross has also worked alongside Fordyce Community throughout their replant process. When a handful of Fordyce Community’s founding members—or core group—would meet to discuss the values and new direction for the church, Ross would counsel them.

The church’s core values have changed since Lighthouse, Rogers said. They have put more emphasis on small groups “to train people up and make disciples.” Ross said he has been encouraged by this enthusiasm and heart for discipleship. 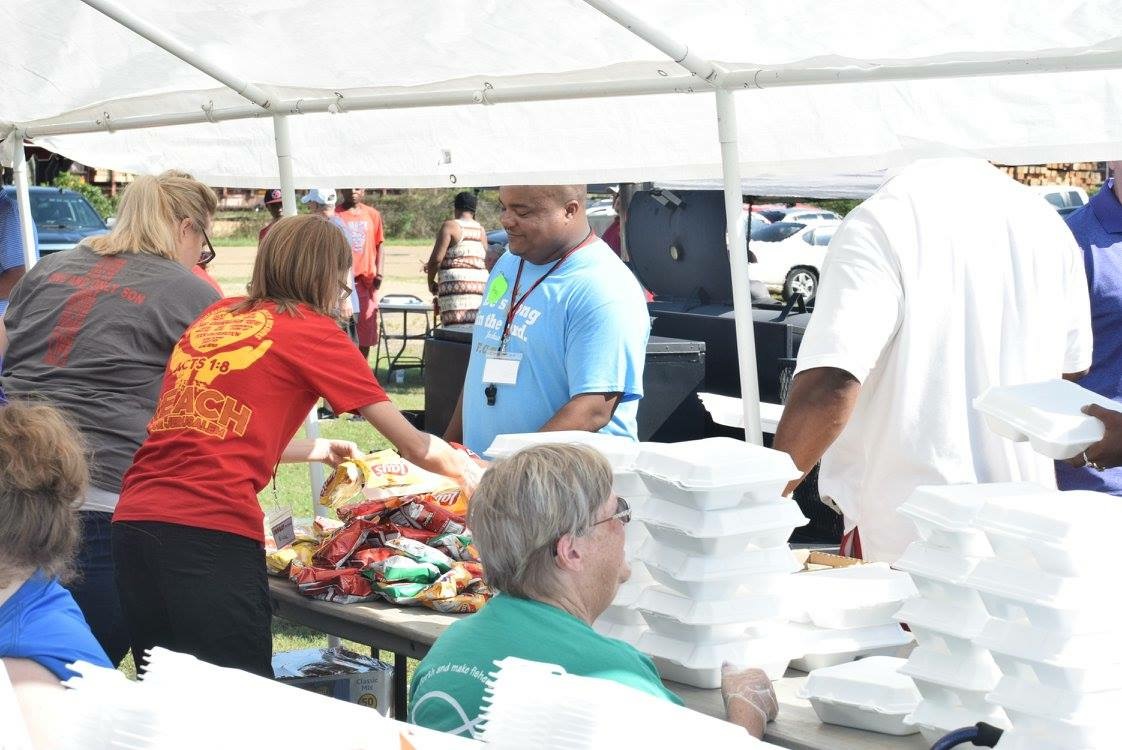 “One of the things that stood out to me in the infancy of [Fordyce Community] was when Roderick said something about discipleship and how he had a heart to disciple his flock,” he said. “Yes, he was grateful to get the resources through the ABSC and through our church, but I could see it was because his desire is to disciple those God brings to him and not just to meet the needs of our community.”

“Our dream has been to be a multi-cultural church, and that’s unheard of in Fordyce,” Rogers said. “Well, we’ve made a stand that it is God’s church and it’s for everybody—and we’re going after everybody! After that block party we’ve seen Hispanic and Caucasian people come join us for service.”

Along with the help of Geyer Springs and the Carey Baptist Association, Fordyce Community and First Baptist Fordyce co-hosted another community outreach event in August they called Impact Fordyce. Ross said they had three goals: share the Gospel of Jesus Christ, meet specific needs of the community, and introduce Fordyce Community to the area. All three were accomplished.

“Three souls were saved,” Ross said. “We provided backpacks and school supplies. We mowed yards. We painted a home. And, most importantly, we had the opportunity to pray with and for many hurting families and individuals in our area…The following Sunday, Roderick was able to pick up several youth who have never attended Fordyce Community before on the church’s bus.”

Another result of Impact Fordyce was racial unity, Ross said. Even though some in the community protested, Ross said, “Our community was able to see our churches work together in a way that has never been seen before. In light of recent national events and our current climate, this demonstration of racial unity was much needed.”

Reflecting on their new partnership, Ross echoed what Rogers said it is like to witness God’s hand in it all, “It’s been exciting just to see all of this come about—to minister and toil a long time and not see a lot of fruit, but then all of a sudden here it comes.”