Oftentimes, God speaks to us through a whisper. This whisper could mean anything. Perhaps, it’s God telling us to go towards specific areas of the world that need to hear the good news of the Gospel. Sometimes He sends His people overseas; other times He sends them to their literal backyard. It’s never an easy route to take, but God has proven to be so faithful as we walk on this journey.

Jon Smeltzer, the current pastor of Summit Bible Church in Summit, Arkansas, knows this journey far too well. After college, Smeltzer started an Adventure Bible Camp in Tennessee with his family. As time went on, Smeltzer and his brother felt called at different times to go elsewhere. “I needed to grow and I knew that God would grow me spiritually as I followed Him,” said Smeltzer.

Shortly following that decision, Jon left Tennessee and pursued growth at River Bible Church in Mountain Home, Arkansas. After years of being the family minister at River Bible Church, Jon Smeltzer got a call about the small town of Summit, Arkansas. Prayer is our best weapon and our best resource to talk to the Lord, and you can be sure that Jon knelt to his knees over this decision. The path was made clear. 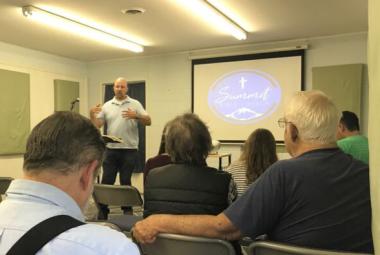 For a moment, Smeltzer began questioning how he, a small town boy from Mountain Home, would be welcomed into this new community. However, our Lord is so good, and He is so faithful. With the Lord walking with him and leading the way, Jon was able to connect with this small town and grew to love it. “If he can use me, he can use anybody,” said Smeltzer.

Even though people in his current congregation come from Summit itself, Jon found that neighbors who have lived on the same street for years were gathering together at his church and began to introduce themselves for the first time ever all the while worshipping God. “It’s fun to sit and eat a meal together with your literal neighbors,” Smeltzer explained. Not only is Jesus being put on display, but there are some real life changes happening in the Summit community.

As the elders were praying through raising up and releasing leaders for the purpose of restoration (what God had laid on their hearts for 2019) The River Bible Church got an offer to take on a sanctuary and fellowship hall that had been left vacant in Summit, AR. Weekly, Jon and another brother in Christ walked the streets of Summit as they prayed over the vision for this church. Listening closely to what God might be telling them, the people from the River and from the community of Summit began the renovation process together. The hope is for the project to be completed by October. 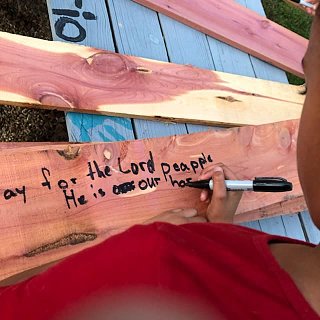 “When people think about church planting, a lot of times people think of big cities, but remember, God’s children are in those big cities the same way that God’s children are in Summit. 1 Thessonlonians 1:7-8 says, “...you became an example to all believers in Macedonia and Achaia, but your faith in God has gone forth everywhere so that we need not say anything.” That is my prayer for Summit, Arkansas: that the impact that happens in this small town will affect the world. I’m looking forward to seeing what God does.” - Jon Smeltzer

Our Church Planting Team is thrilled to see how God uses Jon Smeltzer, his family, and his community to further the Kingdom.

“God’s gonna do something!”