Ryan is a graduate of Southwest Baptist University (Bolivar, Mo.) and earned an MDiv from Midwestern Seminary in Kansas City in 2008. After spending four years in college ministry in Missouri, Ryan became the associate pastor at First Baptist Church of Mustang, Okla. He served there for eight years before becoming the Discipleship Pastor at Geyer Springs First Baptist in Little Rock in 2012. In 2014 he began meeting with a core group of believers that would become Crosspointe Church in Bryant, which launched October 5, 2014. His wife Andrea grew up in Searcy and they were married in 1995. Ryan and Andrea have four kids: Clay, Broc, Hope and Bree.

Crosspointe is an incarnational, family-integrated, disciple-making church. It’s strategy is to decentralize many of our ministries in order to engage unchurched people in Saline County. We also share a conviction that the primary disciple-makers in a child's life are their parents. Our desire is to equip our parents with tools and resources to best disciple their children. We also believe Jesus gave His church a mission statement: make disciples. Our goal is to foster an environment for developing life-long, multiplying followers of Christ. Saline County has double in population in the last 10-15 years, largely because of the rich education provided by the school systems. Therefore, this area attracts a lot of school-age families, which is reflected in our church body. Recent studies indicate that 59% of its residents (approx. 65,000 people) profess no religious affiliation at all making it a significant mission field. 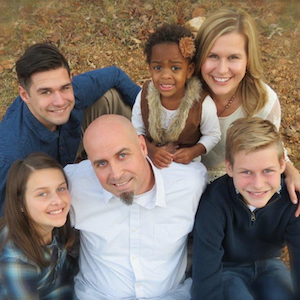