Is God calling you to jail or prison ministry? Is He calling you to mentor a prison inmate?  There are 75 counties in Arkansas, and each of them have at least a city or county jail. The state prison system has units in almost every area of the state.

There are over 50,000 people on parole in Arkansas.  Mentors for re-entry are needed in every county.

How do you get involved?

Contact your local city or county jail and ask if they have a jail ministry or jail chaplain’s program.  Find out who is in leadership, contact them and determine what is needed for you to get involved.  (application, background check, experience level, etc.)

Most of the larger prison units have a full-time, state paid chaplain.  Arkansas Department of Correction units have several levels of volunteerism.  Contact your local prison chaplain and find out their needs and application process.  See the map of prison facilities and contact information HERE.

Mentor a State Prisoner BEFORE or AFTER Release

In today’s society, we generally do not have the kind of relationships that many would see as God ordained – relationships that foster our growth, hold us accountable, and encourage us to press toward healthy goals. The primary reason mentoring is desperately needed today is to supply positive relationships that are lacking in our culture.

The Arkansas Department of Correction (ADC) Re-entry team is asking faith groups in our towns to help inmates re-enter society and become productive citizens.  Some 95% of those in prison will one day re-enter society.  The process includes:

The ADC re-entry team provides full training for inside and outside mentors.  Those who are preparing to return to society need loving mentors who will demonstrate right living, help them break the strongholds of their former lifestyles, hold them accountable for their actions, and walk with them as they rebuild new lives.

A very high majority of prisoners and ex-prisoners come from fragmented families. Consider these general statistics about the family background of offenders:

Approximately 15 percent of male and 55 percent of female prisoners were physically or sexually abused as children; for those raised in foster homes, the numbers rise to 44 percent of men and 87 percent of women.

There is an obvious need today for believers to be committed to mentoring ex-offenders. Other factors that point to the dire need for mentors are:

· The high level of dysfunctional families within the ex-offender population due to rising rates of divorce, addictive behaviors, violence, and abandonment
· The substance abuse history of 70 to 85 percent of those convicted of crimes
· The low level of education and lack of job skills of those coming out of prison
· The long-term effects of isolation and institutionalization upon prisoners 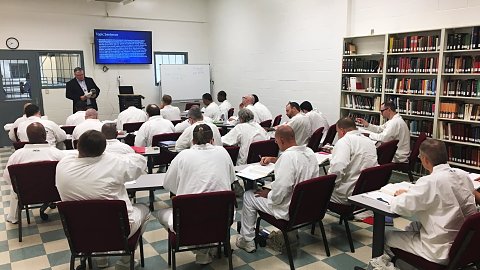 October 2019 - Pray for the Prison College

October 2019 - Pray for the Prison College