When a group of Arkansas Baptists showed up in a Detroit neighborhood the morning after a shooting, several of the area residents told the mission team, “Listen, we need God, we need God,” and four guys were led to Christ—all thanks to the Cooperative Program. 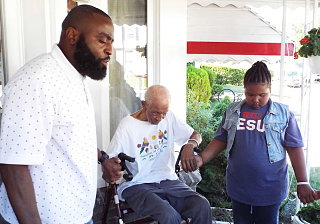 Chanson Newborn, pastor of Fellowship Community Church in Forrest City, said when his group arrived at Heart & Soul Community Church in Detroit last summer, they realized it was a rough neighborhood, and he knew they were stepping into a difficult, challenging situation. “There were abandoned cars and houses with grass growing high in the yards. It looked like a desolate place to be.”

That was quite a start for these missions trip newbies from the Arkansas Delta who had traveled to Michigan to help local church planters host block parties. But they quickly learned that God can use volunteers who feel inexperienced to impact an unfamiliar community for the Gospel. Chanson’s group was surprised by how openly those in the neighborhood responded to the team’s presence as they moved through the complex handing out fliers. “At first,” Chanson said, “it was a little strange, watching people come out of their apartments, crying, asking us to pray for them. It was at that point we knew that God was already at work in that community.” In fact, some of the first people the team encountered were the four men who were saved. “And that’s a God moment,” Chanson said. “Only God can do that!”


Watch related video: "Around the Block"

Sixteen people from Fellowship Community Church in Forrest City, including Fredrick and Anita Irby and their son Fredrick, Junior, traveled to Detroit. The experience was especially meaningful for the Irbys because in addition to this being their first missions trip, the couple celebrated their wedding anniversary that same week, and their son responded to Pastor Cornelius’ invitation during the block party. “On our very first day there,… my son got up and said that he wanted to accept Jesus Christ as his Lord and Savior,” Fredrick recalled. “It was a very great moment for the family and for the ones that went on the trip with us.” His wife Anita agreed the trip was amazing: “From the first time meeting members from the other two churches that went along with us, there was an instant connection. We had a long drive, but it was wonderful because we had conversation going, getting the chance to meet and learn about our fellow brothers and sisters in Christ.”

Hear from the Irbys and the testimony of their son [Video] 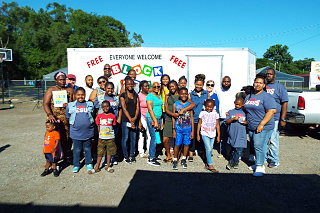 The Cooperative Program can facilitate other Arkansas Baptist churches to participate in life-changing missions ministry like this. ABSC Church Planting Strategist Chad Grigsby said, “Cooperative missions is the best way to encourage more churches to get their people on mission. This strategy engages established churches to partner with new churches to serve on the mission field.” Tracy Archibald, block party coordinator for the ABSC, explains it this way: “When you give to your church and your church gives through the Cooperative Program, we partner with the Arkansas Baptist State Convention, along with Delta churches, to go join the effort in spreading the Gospel in Detroit. Arkansas Baptists have done a lot of work in the Delta area with church planters, and now they are moving from their comfort zone and stretching out to do missions. It’s encouraging and rewarding that they can see God moving outside of their areas and want to extend God’s love to Detroit.” This was the Irby family’s first time to go on a missions trip, and Fredrick agreed, “It was very exciting to impact the Detroit community and spread the Gospel.”

Anita said that although this trip was a lot of work, sharing meaningful moments with the others on the team was wonderful. “All of us got together in a group, and we held hands and prayed….Some people came over and were wondering what we were doing. As we were going out, people were opening doors and wanting prayer,…and you don’t see that too much.” She says that if they’d asked her to go to Florida or Colorado, she would have gone, but the opportunity was to go to Michigan. “If they ask again, wherever, I would definitely love to go and share another experience like that.”

Watch part 2 of the Detroit series, "The Arkansas Delta to Detroit"

What’s the Arkansas connection to Detroit, Michigan?  Metro Detroit is identified as one of NAMB’s 35 Send Cities, and only one Southern Baptist church exists for every 38,000 people there. The area is grossly unevangelized. “It takes more people and more churches on mission to reach areas like Detroit with the Gospel,” said Chad. In 2017 several Arkansas pastors responded to the need to partner with some of the Send City church plants in Detroit. Because Detroit shares several similarities with our Delta region—like socioeconomic issues and decreasing population—the partnership seemed like an effective fit. “We were asked to connect with a group of planters in Detroit through the Send Network because they were experiencing some of the same things that we were experiencing here in Arkansas, particularly in the Delta,” Chanson said. “After touring us around the city, the Detroit group began to share their burden for the lost in their city and what God was doing through them in Detroit.”

Block parties are an effective tool for evangelism because they’re non-threatening events. “Once you set the block party trailer up and start the music and the bounce houses, people get to come on their own. It’s all free, nothing is charged, and we feed them hot dogs and cotton candy, but most of all we get to share the Gospel with them,” Tracy said. “It’s non-threatening because we just invite them—they don’t have to come.” Chanson feels block parties are very impactful 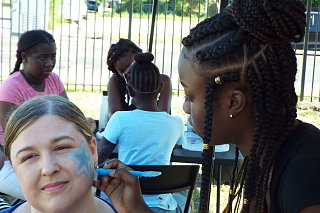 because they create opportunities to share the Gospel. “With face painting, bouncy houses, kids playing basketball, and free snow cones—those types of tools allow you to have Gospel conversations,” he said. “A block party trailer is an excellent way for these church planters to help build their churches and spread the Gospel of Jesus Christ.”

Fredrick explained the Arkansas team started block party training as soon as they arrived in Detroit to ensure that everyone was equipped. “In the Delta in Arkansas we do a lot of block parties—that’s one of the things I was excited about because we were familiar with them and wanted to help the church planters learn how to utilize some of those tools and resources,” he said. “We went out into that community and handed out fliers to let the people know about the block party and the different activities we were having. It was so exciting to see God moving; His presence was there when we were going door to door and people were asking for prayer.”

Chanson’s group knocked on the door of an elderly couple that lives close to the church and just told them, “Hey, we’re having a block party next door—would you like to come?” The couple said, “Block party? What’s a block party?”  The team answered that it was a way for the church to connect with the people of the community. “They came to the block party, which was really neat to see,” he said. People responded in unexpected ways, like coming out of their apartments asking for prayer. Immediately Chanson “knew that God was already at work in this complex. It felt as if we were supposed to be there as part of this mission effort.” The Arkansas group worked with three church planters in Detroit: Brother Cornelius, Brother Antonio, and Brother Cory. Chanson said he could relate to their situation because “it’s the same context that I’m dealing with in the Delta. It was good to be able to come alongside another brother and to serve beside them and help with Kingdom work in another place outside of the Delta.”

Fellowship Community Church in Forrest City is an Arkansas church plant that’s only four years old. “Being a young church, we were always looking for opportunities where people can come alongside us and give to us. This trip was a joyous experience for us because it was a great chance for us to give back. Instead of us having our hands out, we were having our hands out to help, to serve, and to give,” Chanson said. “It’s not cheap; it’s not free to go.  You have to take off work, travel, all of that, but it meant a lot to me as a pastor to see my church sacrifice, to serve, to give of their time and be part of this mission in Detroit. To me, it showed their love for God."

Not only was this mission partnership between Arkansas and Send Detroit, but churches across Arkansas joined together for this mission effort. In addition to Fellowship Community Church, members from Otter Creek Community Church and First Baptist Church, Stuttgart participated in this trip. From those churches, 26 people traveled to Detroit in an effort to impact lostness.

When Arkansas Baptists give and serve together through Cooperative Program ministry, we are able to reach our state and beyond with the Gospel. “When you give to your church and your church gives to the Cooperative Program, you are enabling new churches to go on mission. Even though these trips are short-term, the work is ongoing. Because we are partnering with Cooperative Mission efforts, lostness is impacted and the mission continues long after the short-term team has left the field,” Chad said.

Through the Cooperative Program, church plants with limited resources are able to serve other church plants across the country. Ninety percent of the Arkansas Baptists who traveled to Detroit were on their first missions trip. This Cooperative Program partnership experience showed the people of Fellowship Community Church “what we can do to be more of an impact in our own community, to help us grow more spiritually, and to see what the needs of the people are here,” Fredrick said. “It opened our eyes to see that Forrest City is in the same predicament, and what we learned in Detroit, we can bring back here and apply it to our own community.” He said it was exciting to meet new people from the other churches that joined them and enjoyed coming together as Christians to minister to other people.

Connecting churches together to do ministry is the primary purpose of the Cooperative Program, which creates the strategy and provides the resources that churches can use to evangelize the lost. Chanson said, “It meant a great deal to me that several churches were coming together in unity and love to accomplish the Great Commission and spread the Gospel, not only in our context, but in other parts of the country—in Detroit. We shared the love of Jesus together as partners.”