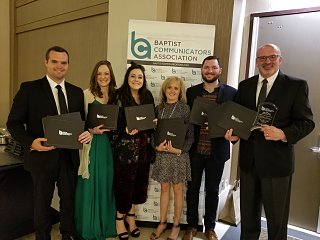 Check out our award-winning communications by visiting our Camp Paron website, listening to The Grind podcast, and watching the feature video "Church Planting-Dixie Jackson."


“Our ABSC communications staff has been passionately working to communicate to Arkansas Baptists the greater picture of how God is at work through our churches both in Arkansas and beyond our state borders. Because they are a relatively new team, it was a blessing for them to see other professionals acknowledge the quality of their work with four different awards. This gives them great confidence in working to create new and better ways to connect Arkansas Baptists in seeing what God is doing in our state,” said Greg Addison, ABSC associate executive director.


Communicators from Ouachita Baptist University (OBU) won multiple awards in the 2018 BCA awards competition, including one of BCA’s annual seven grand prize awards. OBU’s Office of Communications was honored with the Arthur S. Davenport Award for Exceptional Achievement in Public Relations and Development for its Texas Recruiting Campaign, which also garnered a first place award in the category of communications and/or marketing strategy, less than $25,000 budget.


"It's a privilege for Ouachita's Office of Communications to be honored by our professional peers. We are especially grateful to be recognized with this year's public relations grand prize for one of our marketing campaigns designed to encourage prospective students to explore Ouachita for their college experience," said Trennis Henderson, vice president for communications, Ouachita Baptist University.


Speaking on behalf of all Arkansas Baptist communicators honored with BCA awards, Henderson added, “Communicating what God is doing through Arkansas Baptists is a calling we are committed to pursue."


BCA is a professional organization of communicators who serve in editorial, public relations, electronic media, photography, management, marketing and graphic design positions principally within Baptist agencies and institutions. The group consists of some 250 members from across the United States and the world. Margaret Colson, ABN writer and copy editor, serves as executive director of BCA.

Third Place, Audio (including podcast), Other
The Grind Podcast

***This article was originally published on the Arkansas Baptist News website. It is used with permission.